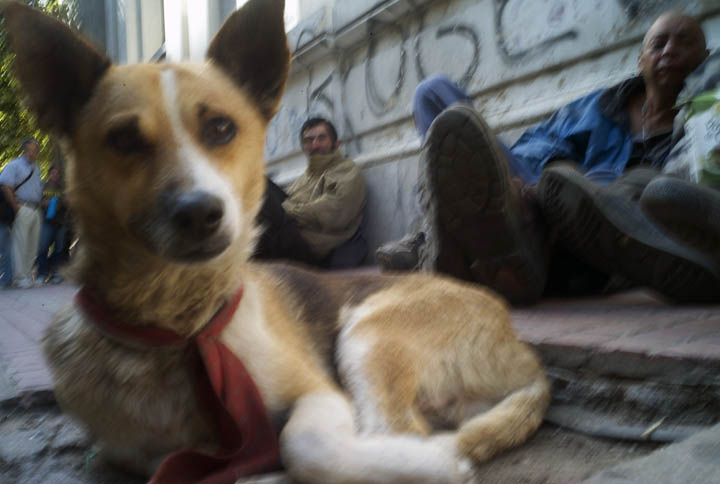 
A dog wearing a tie joins a group of men who are waiting outside a church to receive free meals.

Born in Harlem, New York. Ric is currently based in Oslo, Norway.

He studied painting before switching to photography because of a need to realistically document his awareness of our shared humanity. The issue came into focus for him as a teenager, while listening as concerned adults complained of the media's consistent portrayal of blacks and Latinos as “Other.” These complaints helped him to understand how who we are can shape how we see.

And despite how we see - experience has taught him - people are the same everywhere: we have similar fears, cry similar tears, celebrate loved ones and friends, encounter the sufferings of sickness and old age, and eventually mourn our dead. Such are the universality of issues which bond us as a world community.

After years spent working as a news photographer in the United States, Ric moved to Lima, Peru, to focus on documentary work. He subsequently moved to Nairobi, Kenya (May 2012), Kampala, Uganda (May 2014), Kigali, Rwanda (June 2015) and Oslo, Norway (September 2017).

Ric is committed to creating a visual journal that speaks of the resilience, normalcy, estrangement and injustice that characterizes the lives of “others,” as he collects evidence of our shared humanity. His photographs are an expression of awareness - a highlight of the evidence he has gathered.